Its just over a year ago (19 October 2012), that the JISC/HEFCE-funded Track OER rapid innovation project finished. You can view the grand finale videos on the project blog.

We’ve recently had some fresh interest in the project, so I thought I’d take a look at the recent data.

We used and extended CaPRéT as one of two strands of work in the Track OER project. We experimented with Piwik and Google Analytics as alternative analytics back-ends, in place of the custom Node.js/ MongoDB/ Hummingbird one originally developed for CaPReT. This was because:

You can see the CaPReT-Google Analytics side-block on the bottom-left in the Bridge to Success OER content on The Open University’s LabSpace site. 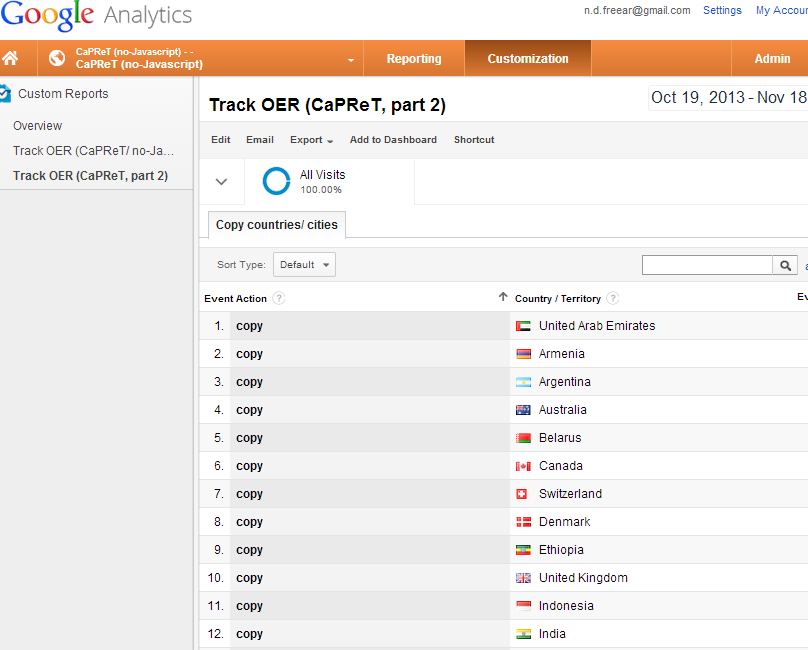 One year on, Google Analytics is still busily collecting data…

Additional screenshots are in this Google Doc (temporary measure – should be in Flickr or similar…).

You can find more background information on the Track OER project blog, on Cloudworks.

Developers can browse and fork the open source code on GitHub.

By the way, much of the development occurred in the Institute of Educational Technology with input from colleagues in Learning and Teaching Systems (now IT) and the Open Media Unit (OMU).

Funding has been received from JISC for a new project, TRACK OER. This is a rapid innovation project with £25,000 of funding over 6 months starting 19 March 2012. The project will extend ways to track resources as they are transferred to other systems such as VLEs or repositories, or if they are cut-and-paste copied. Two separate prototypes are being extended, one developed in partnership with OLnet fellow, Scott Leslie of BCCampus in Canada, and the other by Brandon Muramatsu of MIT under an earlier JISC grant. The development work will be carried out by Nick Freear, Will Woods and Patrick McAndrew (PI) will also be involved.